Why Audio AutoPlay Not Working?

The main reason behind audio autoplay not working is the Google Chrome Autoplay Policy. In April 2018 Google Chrome strictly implemented the  Autoplay policy. Check out what is on Google Chrome Policy.
Link: {getButton} $text={Google Drive Link} $icon={link} $color={#0095ff}
If you don’t understand I will explain it briefly.

Muted autoplay is always allowed means that if you add a muted attribute or if you mute your autoplay audio/video then the autoplay works perfectly without any issue.

Autoplay with sound is allowed

There are three points. let’s describe it.
User has interacted with the domain: Whenever a user clicks or came from the same domain autoplay works.
I am going to use this point to autoplay the audio.
Other Points: You can easily understand others’ points. Let’s go for the solution.

As I already said I am going to use the second point that I am taking user permission to autoplay audio. Let’s move towards the solution with a stepwise process.

Here is the stepwise process to fix autoplay not working for all browsers. First, you need to add the audio tag with audio on normally. You need to create an audio player normally.

Also Read: How To Add Audio Files/Mp3 On Blogger {alertInfo}

Normally, you can use the below code to add the audio player with an audio file on it.
Code We are using user permission to autoplay audio in blogger or any website. For that, you need to paste the below javascript code on the post that you want audio autoplay. 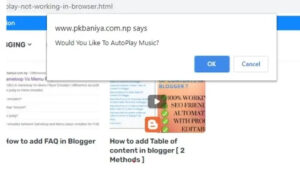 You can see whenever the page loads it asks the user/visitor to start autoplay or not?

Also, you can change the question according to your wish.

This is how you can easily fix audio autoplay not working in a browser. I hope you like this solution and comment below if you have any problems.

How to get more than 10 results per page in google search ?

How to get more than 10 results per page in google search ?

How to Enable or Disable News and Interests on Taskbar in Windows 10?

How to Fix External Speakers not working in Windows 10

How To Check The Domain Age Of .Com.Np

How To Add Mp3 Audio Files On Blogger [ Updated ]

Saroj - September 20, 2022 0
Get Free Domain For Blogger You can get a free domain for 1 year at freenom.com. for your blogger. Just a few steps will connect you to...

How to Create a New Page?

I am Saroj Baniya a bloggist as well as a noob developer and SEO modrator.
Contact us: [email protected]